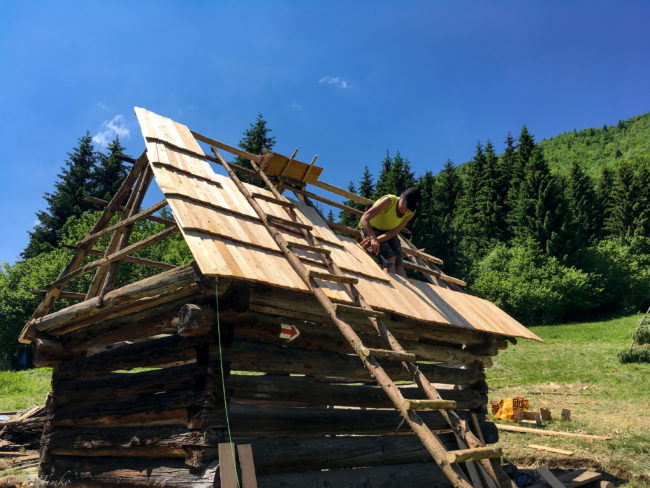 For those who do not know, the renovation of the hayloft (actually a small wooden hut) under the Krstou (Tlstá hora) mountain is our latest contribution to the current debate on what tourist shelters in Slovakia should look like. In addition to the effort to build modern buildings and designs, we still hold the position that classical folk architecture cannot be replaced completely.

We received a tip-off for this buildings from Maňo Huba, who is the godfather of the traditional log cabins renovation movement, and who became the main guarantor of the entire renovation. And, in order to ensure we followed authentic construction methods, we had the younger of the Hubas, Jakub, to supervise us.

Our main media partner was the tourist portal Hiking.sk, where most of the important coordination took place.  However, during preparation for the renovation work, it was again shown that the internet alone will not be enough, and locals need to be involved as well. While searching for contacts, I managed to find some useful and important people. For the renovation of the shelters in Veľká Fatra, we managed to raise more than 600 euros in financial donations, and we must also thank the tourist club Hikemates.com, which, after its very successful appeal for donations, bought the shingles and boards for the renovation.

We started the whole workparty on Thursday 17th July, bringing in the tools, water and supplies. With adrenalin running high we didn’t wait for anybody else and started with removing the old iron sheets from the roof and began making a big pile of rubbish along the road. The sheets were not only on the roof, but also around the walls, and we also removed them from the ruins of another nearby hut, which had already collapsed. Picks and shovels also came to the fore, cleaning not only the immediate surroundings of the building, but also the rotten floor in the interior. In the early evening the shingles and boards arrived and a large pile of rubbish was sent away on the same truck. 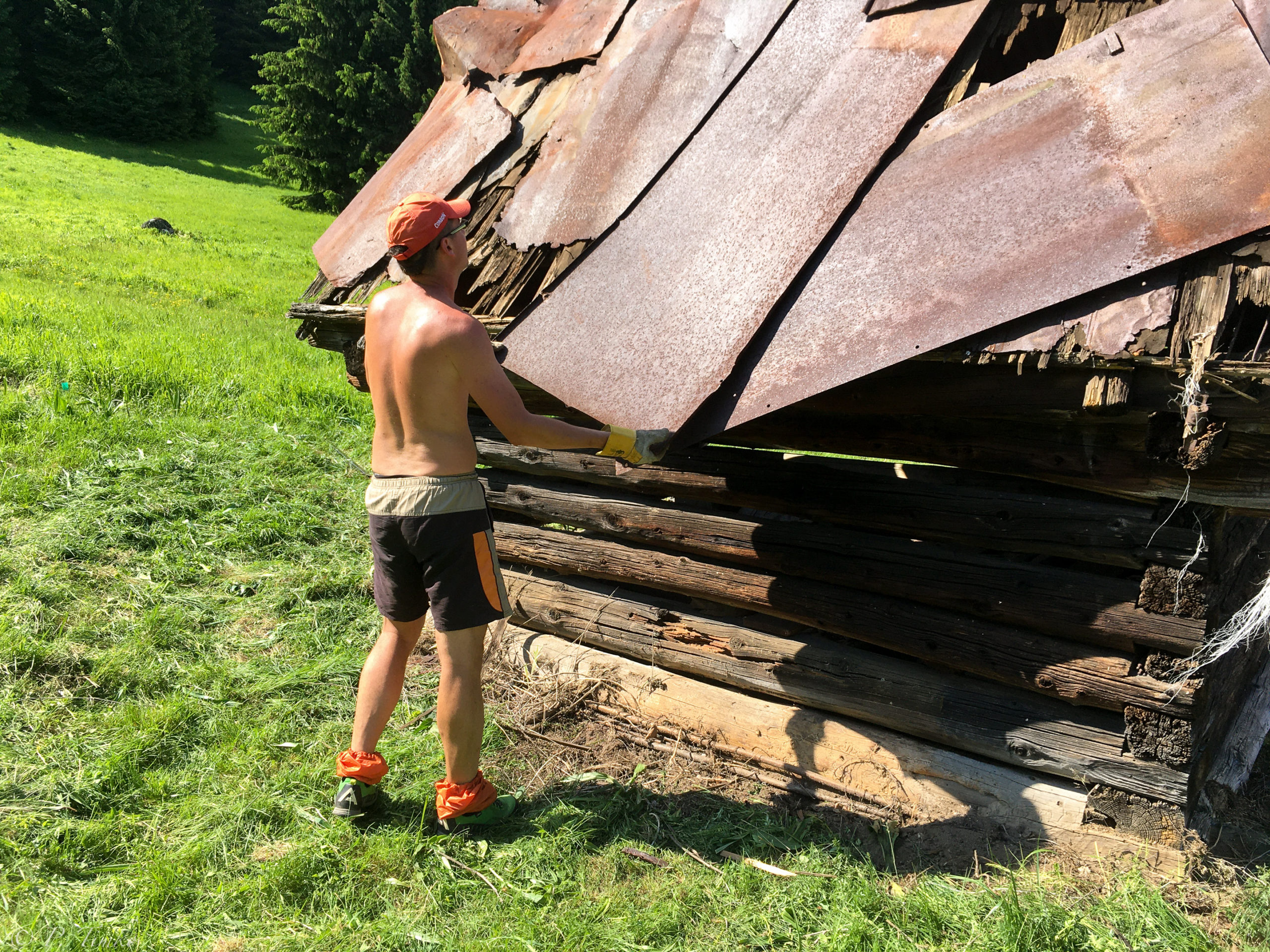 On Friday, we started to replace the rotten parts of the trusses; the edge parts, which were not well covered by the sheets, had suffering the most. We followed the original construction methods as much as possible, which meant fixing the battens with wooden pegs.

At first glance it could be seen that the south-east corner of the hay-loft had dropped, as part of the lower crossbar had rotted away. After inspection, Maňo Huba declared that the rest was still in good condition though, so we lifted it with a jack and underlaid it with stones, which brought the whole building more level.

At the end of the day, Huba senior was replaced by Kubo Huba Jr., while we managed to make progress in digging out the clay, which had been accumulating for many years, and which, when it reaches the wood, begins to gnaw at it mercilessly with rot.

In the forest, we cut the shaft for a ladder and battens, debarked it and prepared it for use. In the dark, Kubo had completed the replacement of all the rotten parts on the north side, so that the next day it could be shed without hindrance.

Part of the team took some tools and went to cut a circular tourist path through Krstá hora, they also made a tourist signpost and transferred the signs from the tree to it. 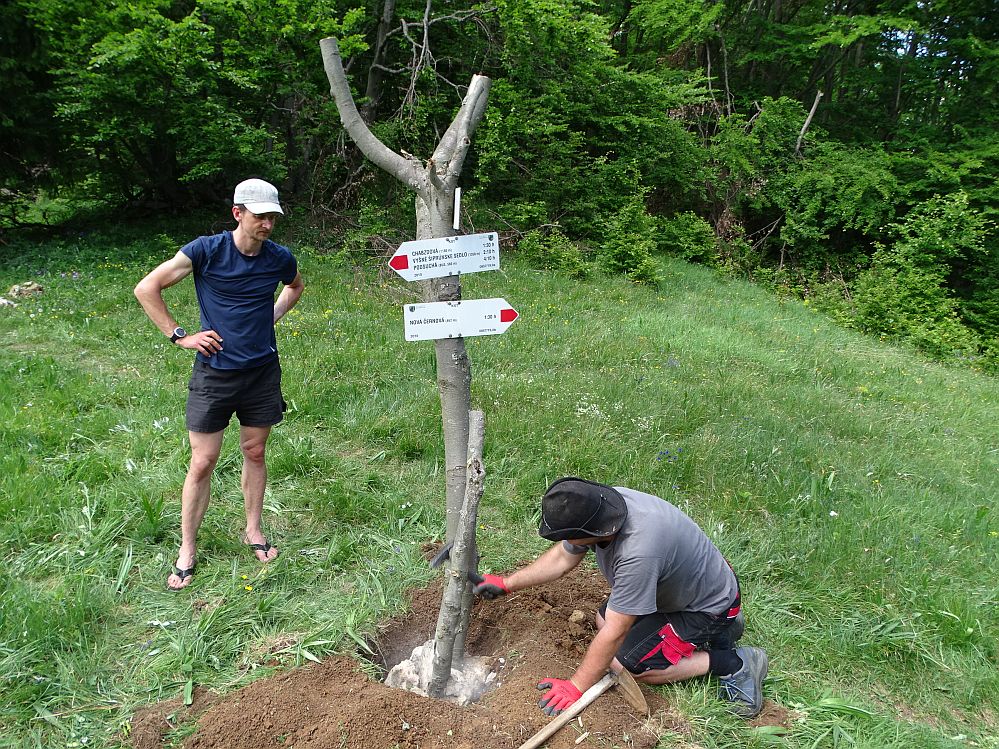 We made pegs from oak wood and carved part of the shingles so that they could be used to slope the roof.  Our team of volunteers changed; some said goodbye, others came. We gradually mowed the meadow to prepare a layer of hay.

In the evening we sat by the fire and the atmosphere can be envied by anyone.

On Saturday we wanted to work on the roof as much as possible, as well as on the rest of the rotten parts of the trusses. Step by step, the northern half of the roof was covered with red spruce shingles, and the beauty of the new roof began to be clearly visible.

A few of the guys went to the upper hut and, in an intensive deployment, cleaned up a large area of ​​hazel saplings, which were literally starting to suffocate the building. Then followed the digging of the foundations, because there was even more rot on the lowest beams. Finally, they thoroughly covered the entire roof with iron sheets as we will not be able to work on this building again until next year.

We did well with the hospitality of the locals, who provided two kegs of beer and a  place to cook at a nearby cottage, and the TV Station Markíza, which came to record a report on the renovation. Some part-time workers who had also worked at the Obrubovanec mountain hut got some equipment from our sponsor (Equip Outdoor Technologies), who is enthusiastic about our activities for the benefit of the tourist public. Some (like the Mountain Bothies Association) also monitor our activities in Britain and while reading our reports they still ask where we found volunteers under age of 55?!

On Sunday, the number of volunteers shrunk, but as the roof was almost completely covered it was not such a problem.

Coincidentally, it was on that day that the locals went to the 25th traditional Mass on Baptism Mount and dozens of people could now enjoy the renovated hayloft. When a lady called out for the third time in enthusiasm how beautiful the hut is, I took a few steps to one side as a tear came out of my eye. Most of the people only knew the roofing when it had had makeshift sheets, but the older generation could remember from their youth when they could still experience such shingled roofs. 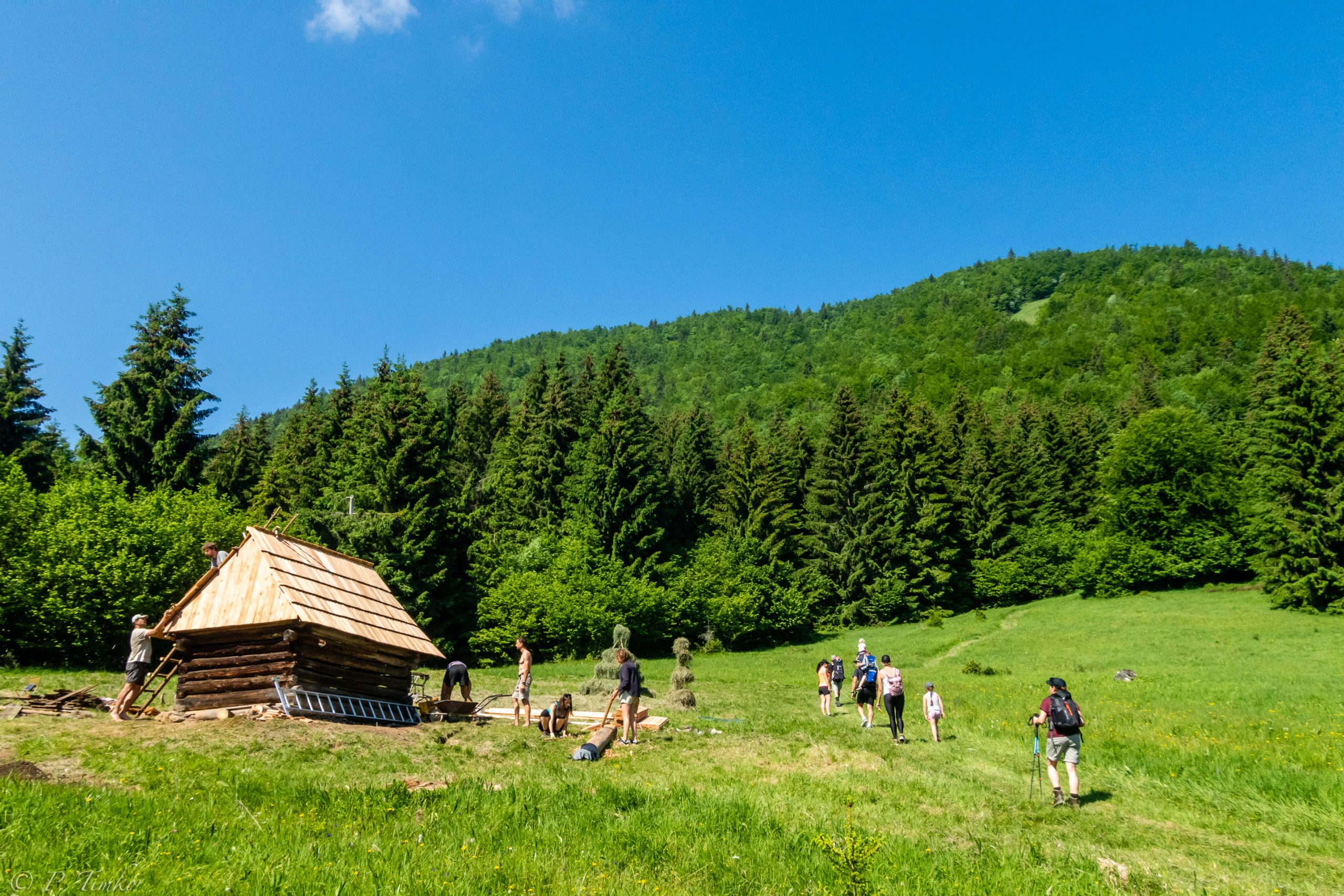 Towards the end, when the guys was nearly ready to leave,  they dug up the rest of the drainage ditch so that the running water would safely bypass the structure.  In addition, we underlaid the foundation beams with stones and removed all the dirt; it was necessary to replace just one beam.

At the end of the day, with a storm approaching, we devoted ourselves to cleaning up.  But first of all we finished the western gable, on which we made a traditional hatch. During the excavations, we found various artifacts and, among other things, two original hooks for hanging the hatch. We tried to follow as many traditional methods as possible, because the hut may be up to 120 years old and it certainly deserves such consistency.

Our thanks go to everyone who contributed with financial gifts, work and organisational support. Something beautiful and rare now remains for us. And we hope now to continue our work and repair at least one more of these hayloft/huts under Tlsta mountain.

Photo gallery from the workparty can be found here 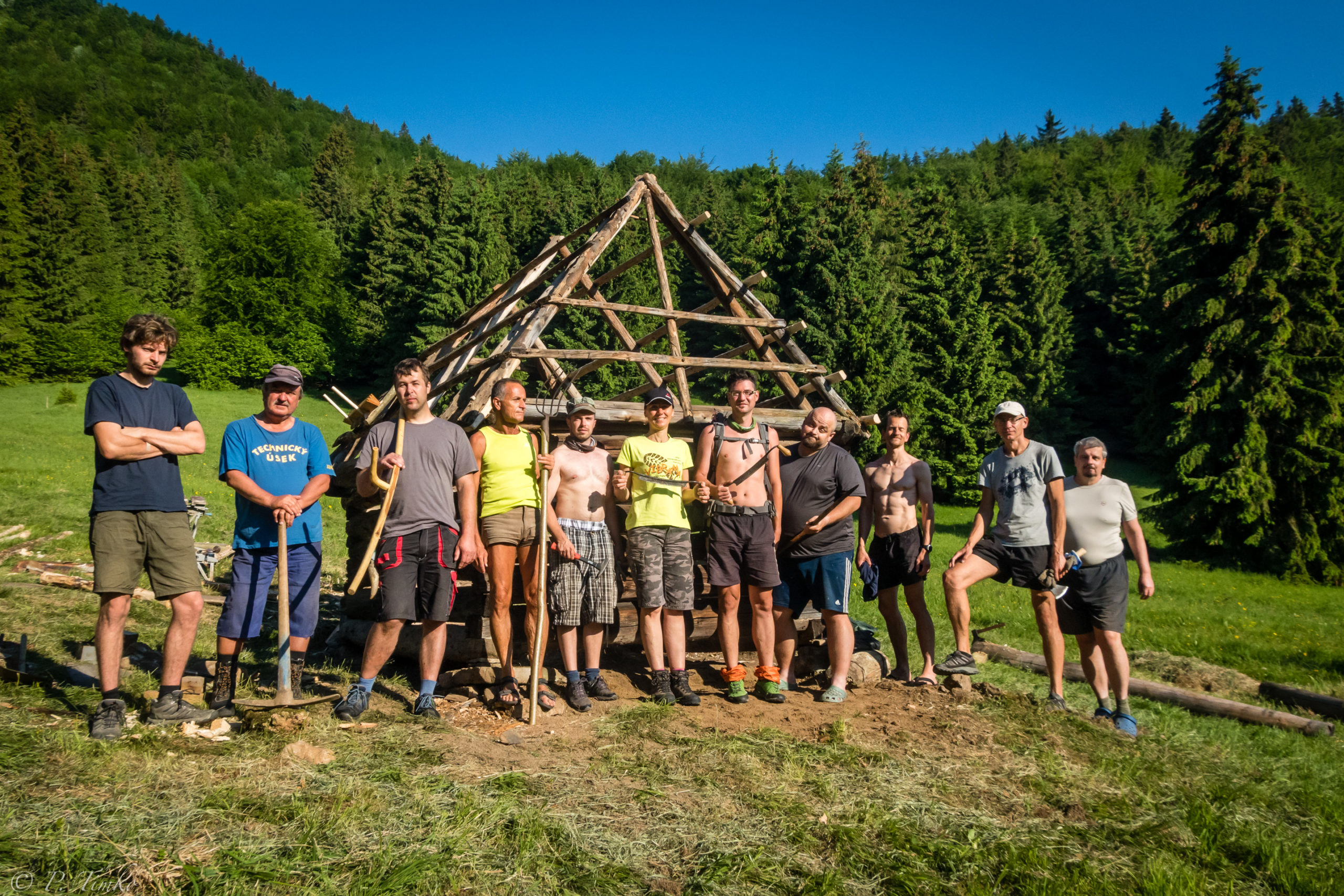