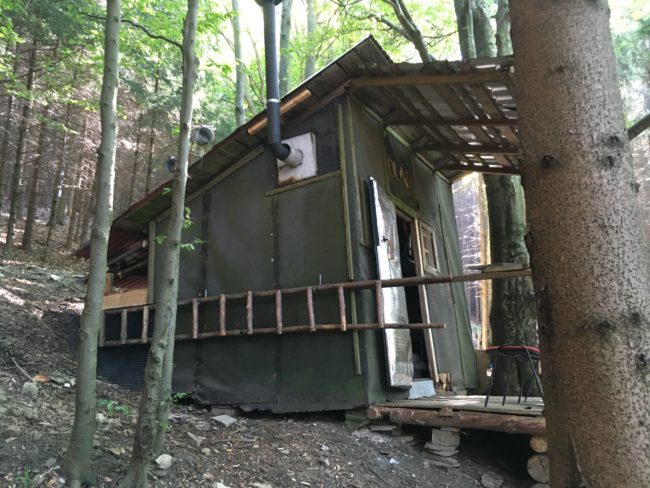 Overhaul of the Drina shelter in Čergov

The Drina shelter needed an overhaul for a long time, mainly because of two things: the shelter was tilted too far back, probably sinking and the metal chimney was very rusty, creating a high possibility that the hut would burn down. After a successful collection of money for the repair of the Tajch hut in the Low Tatras, we collected money on the hiking.sk web site and started to organize the work party to repair the shelter.

Early this year, the door was repaired and insulated, and two small windows on the side wall were added, which illuminated the shelter a bit. The restoration then continued when a new window was installed and some guys from Sabinov made a complete new porch from the boards, which we left there over the winter. In addition, they fixed the fireplace; the roof was also painted, a ladder was made, many useful things were brought such as paper, a broom or a saw, and much more.

As soon as the date of the work brigade was set for the last weekend of August, reparations for the general overhaul began. We bought the most important things: a new (used) stove with a steel chimney, extra parts of the chimney, paint for the roof and the woodshed, steel sheets for the roof of the woodshed, brushes and everything else that we would possibly need to do as much work on the shelter as possible.

The whole event started on Friday, when most of the material was brought up by car to the Čergov cottage. We did not obtain a permit to enter the Čergov hill itself, so we had to start transporting material to the shelter with the help of a trolley. Long and heavy boards, ladder, tools and many more necessary items had to be hauled twice. During the day, other people came to join the work party, bringing all the necessary material to the shelter mostly on their backs. After that some stayed by the fire, and some went to the cottage Čergov, where they went to bed after a tasty supper.

On Saturday, the work party began with the hauling of the remaining pieces in our hands and on our backs. Once arriving at the shelters and starting the work, we found that the entire rear lower part had sunk, not due to the stone foundations subsidizing into the soil, but due to the rotting of the entire wooden foundation of the shelter. After a short debate about a completely new shelter, which, however is not possible at the moment, we finally started to work. The goal was to restore the existing cottage as much as possible including the foundation. The main team solved the support of the cottage with stones and wood, including a small straightening and the others (five people) worked on everything else: steel sheets for the roof were painted, stones needed to support the cottage from the bottom and to be used on the wood floor were brought in, the slope behind the shelter was dug for a woodshed to store firewood, a new threshold was made, and garbage was carried up to the top of Čergov.

The weather and the mood was good because it was a good bunch of people gathered together . The roof was painted a second time (using the exact amount of paint that we had, to the last drop), the stove and chimney were replaced, the place behind the stove was isolated, the work done  was documented, a quarter of the ceiling (roof) was isolated, and a second window was installed. After finishing the work of the day, the team took away the old stove, all things and tools such as a ladder plus some garbage and we moved to the Čergov cottage. Most of the team went home on Saturday night and all the waste and most of the tools were taken. The night at the shelter was a nightmare due to the highly active voracious edible dormice, but the feeling of a job well done allowed at least some rest.

On Sunday, work continued in the solo line-up, as everyone had to leave. Another friend came to help for a while. No one showed up at the shelter, only one runner, one tourist and two cyclists who came to refill their water bottles. The first half of the day was spent digging behind the shelter, so that the bottom of the wood shed floor could be at the same level as the stones that support the shelter. The building of complete woodshed took the other half of the day. Silicone was used on all holes in the roof to prevent them from leaking. The insulation behind the stove and the preparation of the insulation of the second quarter of the ceiling the next day were also done.

What was not done on Saturday and Sunday was completed on Monday: another part was isolated (the second quarter of the ceiling), the gaps between the boards and the wall were filled out with a filler, and a part of the wood shed was completed. The shelter was cleaned and the overhaul of Drina was completed. Necessary things have been brought to the shelter to be used when needed: a saw, fire paper, a water canister, a gutter for the wood shed (which will still need to be installed), a mat and other small items.

It was the third work party to restore a shelter under the flag of Sloboda pohybu group and the second object that this group is looking after. This was solved in cooperation with the administrators of the shelter, a few guys calling themselves Old Wolves. Work on the shelter never ends, so we would be happy if everyone that has an opportunity to contribute financially to the maintenance of this shelter could do so. Repairs that still need to be completed can be done later.

We would like to thank all those who contributed financially and all workers that came: Marek (Starý Vlci), Peter, Lenka + Kubo, Marek, Kraki and especially Stano G.

We also thank the cottage from the cottage Čergov for their help, as they were willing and accommodating. The same goes for everyone who helped indirectly.

Photo gallery can be found here